This world is filled with interesting things, such as cool ideas, life hacking tips, fun facts, amazing places you didn't know about, unbelievable tales and many more. However, there are little known facts you should know that are rather creepy or disgusting. Here are scary things that will certainly give you "the chills". 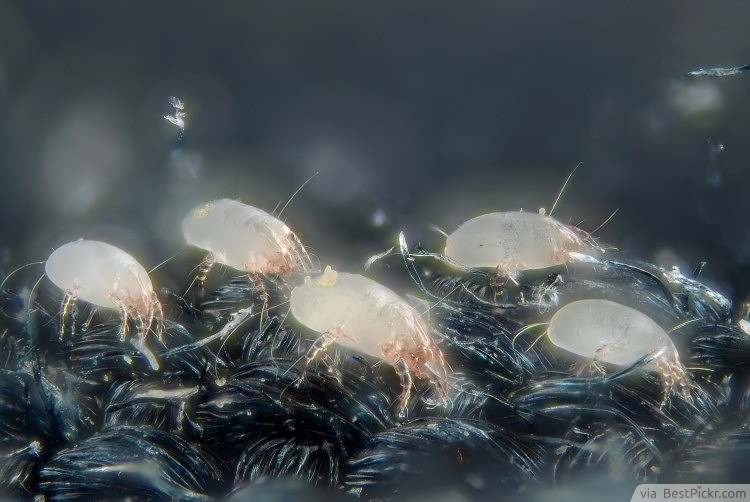 After ten years, a mattress doubles its weight because of dust mites and their feces. An average person spends around eight hours on their bed every night: sleeping, watching TV or reading something. Who else do we share our beds with besides our loved ones? We also share our beds with an insect called a dust mite. Your family and you are sleeping on a bed with millions of tiny insects called dust mites. They eat your dead skin flakes and they comfortably nest in your pillows, bed and furniture. Dust mites are the number one allergen in people’s homes. They affect 85% of people who suffer from asthma. The average person spends about one third of their life in bed. A mattress can contain millions of dust mites. A single one of these insects produces about 20 waste droppings every single day. Each of these droppings can get lunged into your bronchial tubes and lungs. In other words, after you've owned a pillow for about two years, around ten percent of that pillow’s weight will be composed of dust mites and their feces.

Disgusting Things: Crushed Mouse Brains Were Used As Toothpaste By The Romans

This should not disturb you too much at this point, since the Romans haven’t been around for a very long time. However, during their time, they used crushed mouse brains as their toothpaste. Disgusting, isn't it? This will probably make you wonder what they used to consume to take care of cavities.

Scary Fact: 219 Deaths Due To Bird Strikes On Planes

Through the recent years, collisions between air crafts and birds have drastically increased. This occurred possibly because there are more planes in the sky than there were before. On the other hand, perhaps birds are becoming more confused. Deaths which have occurred due to birds attacking planes have exceeded to 219 since 1988. More than 200 air crafts have been destroyed. Most people think that these collisions happen because of increased environmental changes and the fact that planes are much quieter today than they were years ago.

The Average Chocolate Bar Has 8 Insect Legs In It

Chocolate is made from cocoa beans. Once these beans are harvested, they need to be fermented. This means that they are inserted into an earthy area near the place where they were harvested. The sun makes them rot a little bit. After that, they can be taken out. Of course, due to this process many insects swarm in the vicinity of the harvest. Nearly all of the chocolate that we eat has bugs in it. This is because it would be too expensive to produce chocolate without insects. The disgusting thing is that the FDA allows a slight amount of bugs or animal to be present in most foods that we eat.

The Average Person Consumes A Pound Of Insects Per Year

We shouldn't be surprised by this fact. Even though eating insects intentionally is common practice in some countries, most of us don’t enjoy the idea of eating them. However, every person swallows their share of insects without the intention of actually doing so. The FDA says that we roughly consume about a pound of insects each year. This is because most of them are mixed into foods. The majority of processed foods contain small amounts of various insects. The FDA have set limits to the amount of insects allowed in foods. For instance, peanut butter is allowed about 30 insect parts for every hundred grams. On the other hand, fruit juice is allowed to have 5 fruit fly eggs per milliliter.

Gross Thing People Do: Eskimo Mothers Suck Their Babies' Snot Out Of Their Noses

Eskimos are an indigenous people who traditionally only live around the Northern Pole, and sometimes in the areas of Alaska, Canada, Greenland and Eastern Siberia. Naturally, it’s quite freezing most of the time where they live. We can assume that they probably catch colds quite often. Traditionally, an Eskimo mother will suck out the snot out of her baby’s nose. We hope that she actually spits it out after she has sucked it out.

Creepy Stuff: Over 200 Dead Bodies Are Present Throughout Mount Everest

The bodies are used as weight points in most cases. More than 200 people have perished in their attempts to climb the world’s highest peak. However, they are not going to complete waste after all. Everest offers endless options for you to die, including suffocating from the lack of oxygen, falling into an abyss or being smashed in the face by falling boulders. Climbers continue to try their luck at climbing Everest, despite the dangers ahead of them. Because of this, climbers often pass the frozen and preserved bodies throughout Everest’s routes, using them as trail markers. This happens so often than many bodies have actually earned nicknames.

Stuff You Should Know: Soda Is Really Bad For Your Teeth

You’re probably asking yourself how bad? It’s worse than most people can possibly imagine. These delicious, fizzy and sugary drinks, even the diet versions, are almost as corrosive as battery acid. That’s something you would never drink. Surprised? Citric acid is placed into most fizzy drinks because it acts as a preservative. Because of this, sodas can become a serious problem even for the casual drinker’s teeth. It chips away at your teeth and gums. Your mother probably told you to use a straw several times. Use it!

Your Desk Has More Bacteria Than Your Toilet Bowl

The average desk has 400 times more bacteria than the average toilet seat. That is disgusting thing! Think about this before you sit down to eat your lunch at your keyboard. No matter what you’re eating, some of it is going to cover your keyboard, mouse and phone and infest it with germs. The average keyboard has 70% more bacteria inside and on top of it than an average toilet seat. On the other hand, phones are hosts to over 25 thousand germs per square inch. The area on your desk where you usually rest your hands or place personal belongings has around 10 thousand bacteria. Wash your hands and properly clean your work space!

Toasters killed 791 people in 2007! Just to make a point, sharks only killed 9 people during that same period. Think about this for a second. Naturally, the leading death cause by toasters is people sticking metal objects into them while they are still turned on. This might seem like a really easy way of getting out your toast. However, perhaps you should not do it because you might actually die. Toasters are actually quite powerful electronic devices, even though most people aren’t actually aware of this. They generate a lot of heat, they have many wires and they cook your bread. In other words: you’ve got electricity running through wires. If you touch that wire with a knife while you are actually holding it and that electricity will be transferred onto you.