If you’re scared of spiders or snakes, then you will be shocked when encountering any of these top 10 weird looking animals. Some are really cute and charming, but many are extremely dangerous predators you don't want to meet! 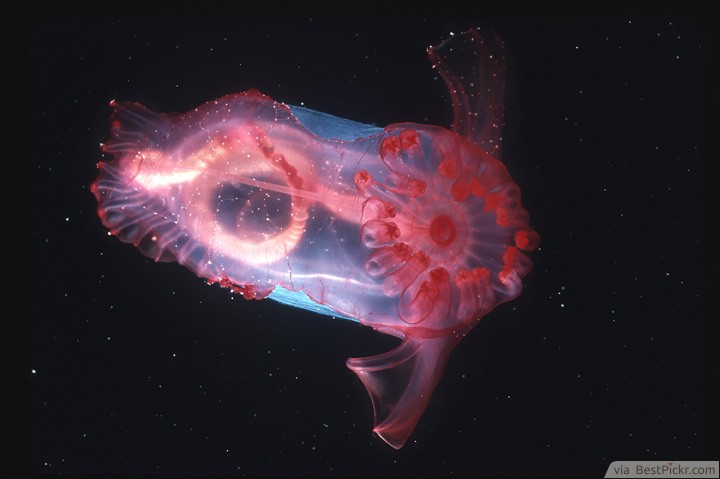 This is a deep sea cucumber that lives up to 16.5 thousand feet below surface. Its appearance is strangely appealing; the red part is its mouth, which is surrounded by its tentacles. The tentacles enable it to ingest edible mud from the sea floor.

Leaf-tailed Gecko, also found in Madagascar. This creature cannot be easily spotted due to its camouflage nature. It is difficult to spot this gecko as it easily blends into a dense jungle due to its leaf-shaped tail.

This fearsome creature was first discovered in 1898 measures between eight and thirteen feet. Of the 125 million year-family, they are the only surviving sharks. They are not a great danger to humans since they live more than 330 feet deep.

Frilled Shark, which was formerly known as a pre-historic animal. Despite the fact that it belongs to a primitive species, the frilled shark hasn't really evolved much over the years. The fact that it has 300 trident-shaped teeth set in 25 rows, makes it a very scary animal to encounter. It also takes about three and a half years to give birth, which breaks the record for gestation period among sharks- as presumed by scientists.

Formerly known as Moloch horridus, this creature is an Australian lizard covered in sharp spikes which it uses for defense. It generally grows up to eight inches and lives for up to two decades.

Aye-aye is a Madagascar aboriginal Lemur. This creature can chew small holes into trees using its rodent-like teeth, and then use its fingers to pull the grubs out.

This fish, which has a unique morphology, resides in the Galapagos Island waters. The red-lipped batfish use their fins to walk on the floor of the ocean since they can't swim.

Umbonia Spinosa is believed to be related to the cicada insect. This extraordinary creature feeds on plant sap.

Blobfish lives in deep waters, off the coast of Australia and Tasmania. This creature is able to float above the sea floor without swimming due to its jelly-like mass, which is slightly less than water. The animal actually looks quite different when it's out of water due to its jellylike mass.

Star-nosed Mole can be found within North America. They live most of their lives underground, just like other moles. The star-nosed mole, which is primarily blind, has tentacles that give them extraordinary sense of touch. They also have the ability to sense the electrical fields given off by their prey.