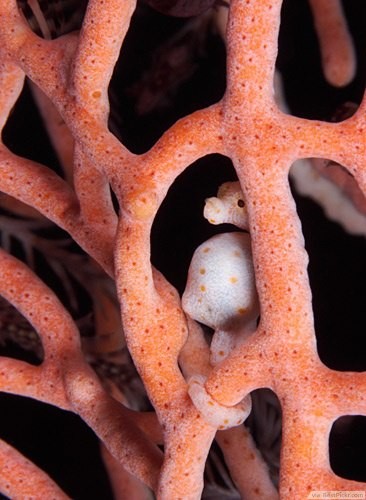 Peekaboo! This little adorable seahorse is actually an adult Pygmy Seahorse, but because of their tiny stature and babyish proportions, they are also called as Baby Seahorse in some regions. A full grown Pygmy Seahorse only reaches up to 2 cm in length. In addition to their size, they love to hide-and-seek among the branches of fan corals which makes it very hard to see them.

So, the next time you go diving near fan corals, try to find them. The trick is to stay very still at least 25 cm away from the coral. This is to ensure the seahorses’ and also the corals’ safety as they are both very delicate creatures. You might be surprised at how many you would find in just one fan coral. Who knows, if you have an amazing eyesight, maybe you would even be able to detect their babies too.

This baby Lined Seahorse (Hippocampus erectus) is dwarfed by the seemingly gigantic pencil tip. The actual size of this cute little critter is no bigger than the head of a pin and is easy to be mistaken as a speck of dust at the top of the aquarium. So, if you happened to have a pair adult seahorses as pets, you might want to check on those tiny particles floating in your tank.

This is a baby Pygmy Seahorse. The big black eyes made it look like a creature spawned from a science fiction movie. It is both cute and creepy.

There are many seahorse breeding programs in the world, however, not all had success due to the critical conditions the seahorses need to be in. This picture is an example of a very successful one. Bred in Steinhart Aquarium, this rare Bargibat's Pygmy Seahorse is among the first of its species to be hatched and cared for in captivity.

Numbers Of Cute Seahorses Are Declining

This is a Lined Seahorse (Hippocampus erectus) in its juvenile phase. Ain't it pretty? Too bad it might be extinct one day along with most other seahorse species.

Lined Seahorse and several of other seahorse species have been labeled as 'Vulnerable' under the IUCN Red List. Along the years, their population have been declining steadily due to various reasons. One of the most notable factors is the traditional medicine trade. In parts of the Asian countries, some regions that are still practicing medicine by traditional means collect and use seahorses as one of their prescriptions to cure illnesses and to enhance the body's immune system. It is believed that prescribed seahorses can be used in kidney detoxification, skin treatment, as anti-aging and anti-fatigue agents, and are also able to cure asthma, impotence, cancer, tumor, and blood clots.

I have never thought of eating this handsome guy to cure my acne. Yeesh.

From the time they were born, baby seahorses are able to search for food by themselves. Seahorses are efficient hunters by nature and they hunt by sight. One of the observations made on seahorses kept in aquarium tanks is that they are often stimulated into feeding by the movement of their prey.

See those white specks around the baby seahorse? Those are nauplii – crustacean larvae which are a staple to their diet. Due to their lack of stomach to digest and store food properly, newborn seahorses need to consume at least 3000 of these specks in a day to keep on going. That is some huge appetite.

Safety in numbers they say. Look at these babies, clinging together like a miniature wheel.

Newborn seahorses tend to move in a group like this. This is because in their earlier phase they live in the upper water column, floating along with the planktons which are their main source of food, compared to the adult seahorses which mostly live in the benthic area (the seabed) where dense underwater plants grow. Because of this, baby seahorses will use anything - debris, floating weeds, and even their siblings' tails - as holdfasts. As a result, cute tiny wheels of baby seahorses.

Newborn Seahorses Are Independent From Birth

This picture shows a male seahorse watching over its newborn baby who seems very excited to have just learned how to swim properly. How cute is that? The seahorse baby looks so delicate and fragile with its tiny body and intricate patterns. Incredibly, this little guy and its siblings all over the world are capable of taking care of themselves from possible predatory dangers and are able search for food independently from the minute they were out of their parent's pouches.

Pot-Bellied Seahorses Can Grow Up To 35cm (13.7") Long ❥❥❥ http://bestpickr.com/baby-seahorse-pictures

Check out this skinny little guy, or should I say, lady. This is a female juvenile Pot-Bellied Seahorse which will grow up to be among the largest known seahorse species in the world. Reaching up to 35 cm in length, an adult Pot-Bellied Seahorse is capable of producing approximately 1500 offsprings at a time. That is a lot!

Seahorses are known for their ninja-like hunting skills. Even the newborn babies. They would silently come up to their prey and then – SWOOSH – in a single move, gulps down their unsuspecting creature whole.

In this picture, the seahorse is probably looking around near its territory to find a (few) meal. If I were a plankton, I’d swim like crazy to get away from it.

Look at it. It’s so cute it could win a gold medal in a cutest fish competition. The way this picture is taken, one could almost say the seahorse somehow looks ‘angelic’.

These are baby Pot-Bellied Seahorses that are native to the coastal waters of Australia. This species is famous among seahorse breeders and is one of the most selected species to be brought up as pets. These babies may not look like much, but when they grow up, they would be considered as the largest seahorse species in the world.

Seahorses are very shy creatures. Most of their kind live in dense underwater foliage to hide themselves from danger and predators. An avid fish collector would know that these creatures need a secluded and private place separated from other fishes living in the tank in order for their natural behavior to shine. Removing or reducing their hiding spots will cause in passiveness of the seahorses. In other words, the more you put in plants for them to hide in, the more you will see them moving around the tank.